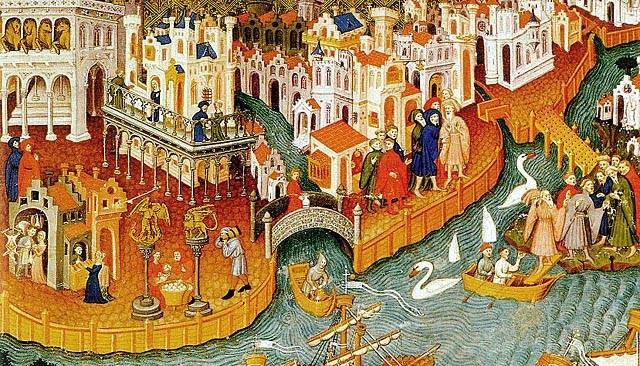 In 1789, during the French Revolution, the government headquartered in Paris found a quick way to turn the fixed assets confiscated from the Church into liquidity, i.e. by issuing State interest-bearing securities guaranteed by these assets (nowadays they are referred to as covered bonds), whose amortisation depended on the sale of the same goods.

Earlier in the past, approximately in the 14th century A.D., the economy in the Mediterranean area was affected by a severe crisis: the price and demand for goods dropped; the outstanding money was inadequate and, therefore, its value was very high, because there were no credit instruments and the amount of the outstanding money was determined by the money not used by the merchants upon the purchase of goods (today this phenomenon is called deflation.)

Some merchants joined their forces and solved the problem by adding up their money reserves and using it parsimoniously, by replacing it with letters of credit and drafts (today this corresponds to banks supporting the cooperative credit depositors’ guarantee fund and issuing bonds…)

Securitization is the current solution to an old problem: the monetization of loans and assets.

Like all the instruments, it can be used either with positive or with negative results, according to the user’s attitude.

The misuse of the securitisation has resulted in an endless mechanism through which attention diverted from the main assumption underlying the easing of a loan, that is its recovery within a reasonable time and with the interests.

Everything went to plan, as long as the economic growth was in line with the debt capacity; then, in 2008, we all know what happened.

Through our structure and securitization company, we aim at meeting a requirement dating back at least to 600 years ago with the original assumptions.